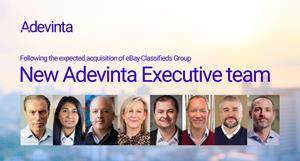 Oslo, 21 June 2021: Adevinta ASA (“Adevinta” or the “Company”) today announces the proposed new Executive team that will lead the business after the completion of the acquisition of eBay Classifieds Group (“eCG”). The transaction was first announced in July 2020 and is expected to complete on 25 June.

The new Adevinta Executive team will continue to be led by current Chief Executive Officer Rolv Erik Ryssdal, and will comprise of the following team members:

“I am pleased to announce the new Executive team that will drive forward Adevinta’s long term strategy and ambitions. Adevinta’s combination with eCG will start an incredibly exciting new chapter for our business, our loyal customers and users, and our talented people. Our two groups share a common set of values, and we’ll continue building a strong culture together. I will be privileged to have such a capable and experienced team of colleagues by my side to take Adevinta to new heights.

"If you look at the new company that we will create, it is entirely unique. We will have an unparalleled footprint globally, strengthened by market-leading positions in 16 countries, including France, Germany, Spain, the Netherlands and Brazil. With the support of our two major shareholders, Schibsted and eBay, we have the vote of confidence to increase our scale and develop new technology to accelerate innovation and improve our offerings for users, customers and our teams.

“Our immediate task will be to integrate the businesses successfully and realise the revenue and cost synergies we identified.”

The transaction with eBay Classifieds Group will create a globally scaled, pure-play online classifieds leader which covers a population of one billion people, receiving approximately three billion monthly visits. With its combined presence in 16 countries, the management teams of Adevinta and eBay Classifieds Group will share a set of strategic principles developed through a common history of acquiring and scaling generalist marketplaces and successfully verticalising them to create value. The global footprint will in turn place the new group in the ideal position to further consolidate the global online classifieds industry.

The new Executive team, supported by the breadth of talent across both companies and the collective experience across the combined portfolio will serve to optimise strategies for the various assets at different stages of development, accelerating monetisation and creating value for consumers and advertisers.

A b-rool package, VNRs and soundbites intended for broadcast news use are available to download from Adevinta Media Kit. To meet the new Adevinta Executive team, go to www.adevinta.com/about/board-and-management-team/

Rolv Erik Ryssdal - Chief Executive Officer
Rolv Erik Ryssdal has been employed in Adevinta (previously Schibsted Group) since 1991. He has held several management positions including CEO of Aftonbladet from 1999 to 2005, CEO and Managing Director at Verdens Gang AS from 2005 to 2008, CEO of Schibsted Classified Media from 2008 to 2009 and CEO of Schibsted Media Group from 2009 to 2018. He was also Independent Director at Danske Bank A/S from 2014 to 2019.

A Norwegian businessperson, Rolv Erik has been the head of seven companies and held the position of Chairman at Schibsted Norge AS, Chairman for Schibsted Multimedia AS and Chief Executive Officer of Adevinta ASA. He is also on the board of Finn No AS.

Rolv Erik holds a master’s degree in Business and Economics from BI Norwegian Business School and an MBA from INSEAD.

Uvashni Raman - Chief Financial Officer
Uvashni Raman joined Adevinta in April 2019 as Chief Financial Officer. Previous roles include CFO of South32 Australian Region (demerged from BHP) as well as holding various operational and strategic finance and commercial roles within BHP between 1999 to 2015, including Segment CFO of BHP’s Global Iron Ore and Manganese businesses and CFO Naspers Video Entertainment from 2016 to 2018.

Nicki has a Bachelor’s Degree in Human Resources Management from Southampton Solent University and a post-diploma in Personnel & Development from Thames Valley University.

Brent Mclean - Chief Product & Technology Officer
Brent joined eBay Classifieds Group in 2010 as Chief Technology Officer (CTO) of Marktplaats.nl, then added Denmark to his responsibilities in 2011 before he became eCG's global CTO in 2013. Under his leadership, Brent has been a driving force in creating a crisp global transformational strategy to create omnichannel experiences across desktop, mobile and tablet. For the last 10 years, Brent has specialized in developing software for online/eCommerce businesses.

Brent holds a B.E. in Electrical Engineering from University of Technology, Sydney. Prior to joining eBay, Brent worked for Fairfax Media in Australia, with his last position being Director of Technology for online classifieds in the three verticals of housing, jobs and automotive.

Antoine Jouteau - CEO, Adevinta France
Antoine Jouteau has been employed by Adevinta (previously Schibsted) since 2009, holding management positions at leboncoin including Director of Business Development (Product & Sales & Marketing) from 2009 to 2012 and Deputy General Manager from 2013 to 2015. He was appointed as CEO of leboncoin in 2015.

Antoine has a Masters Degree from Skema business school and a Masters Degree in Marketing Research from Université Paris Dauphine. He has also been a member of the Advisory Board at Orchestra-Prémaman from 2017 to 2020 and was Board Member of Mobile Marketing Association France from 2017 to 2019. In June 2021, Antoine took over co-presidency of the Club of Innovative Enterprises and Growth within the IFA (French Institute of Administrators).

Malte Krüger - CEO, Mobile.de
Malte joins Adevinta from eCG. He has been working in the online sector for more than twenty years and has excellent knowledge of the automotive business. From 2000 to 2005, Malte worked as head of Product Management and Business Development at AutoScout24. Following that, he founded the car information and evaluation platform autoplenum.de in cooperation with the publishing house G.V. Holtzbrinck in 2006. Since 2009, he has been working for the German market leader mobile.de.

After finishing an apprenticeship as wholesale and export merchant at Ferrostaal AG in Essen, he studied business administration at the University of Erlangen/Nürnberg from 1995 until 2000. Following University, Malte and some fellow students founded their first internet start-up which they sold at the end of 2000.

He joined Adevinta (previously Schibsted) in 2011 and has held several management positions including Chief Operating Officer of South European Hub and Executive Vice President with responsibility, over the years, for most of the markets in the Adevinta portfolio.

Before joining Adevinta, Gianpaolo started his career as a management consultant at McKinsey & Co. Gianpaolo holds a Degree in Economics and Financial Markets from Luigi Bocconi Commercial University in Italy (2003) and a Masters in Business Administration from INSEAD in Singapore and France (2006).

Previous roles at eBay include General Manager of Northern/Western Europe and leader of the leading Canadian classifieds site Kijiji. Zac also led eBay’s classifieds business in Spain for more than two years, where he executed the first integration of eBay’s traditional marketplace business with its classified business, providing users a one-stop ecommerce solution. Zac was a key member of the classifieds strategy and Marketplaces strategy teams for eBay, focusing on all areas of traditional strategy as well as operations improvement.

Prior to eBay, Zac was a senior consultant at the strategy consulting firm of Mars & Company where he managed teams tasked with solving strategic, operational and management problems. Zac graduated from the University of California, Berkeley with a Bachelor of Arts degree in Economics.

About Adevinta
Adevinta is a global online classifieds specialist, operating digital marketplaces in 9 countries. The company provides technology-based services to connect buyers with sellers and to facilitate transactions, from job offers to real estate, cars, consumer goods and more. Adevinta’s portfolio includes more than 30 digital products and websites, attracting 1.3 billion average monthly visits. Leading brands include top-ranked leboncoin in France, InfoJobs and Milanuncios in Spain, and 50% of fast-growing OLX Brazil. Adevinta spun off from Schibsted ASA and publicly listed in Oslo, Norway in 2019. Adevinta is majority owned by Schibsted ASA and employs 4,700 people committed to supporting users and customers daily. Find out more at Adevinta.com.

We use our own and third party cookies to measure traffic on our website and for technical, personalization and analytical purposes based on browsing data. To continue browsing the website you must accept or configure the cookies that will be applied to your navigation.For more information, you can review our Cookie Policy.

This website uses cookies to improve your experience while you navigate through the website. Out of these, the cookies that are categorized as necessary are stored on your browser as they are essential for the working of basic functionalities of the website. We also use third-party cookies that help us analyze and understand how you use this website. These cookies will be stored in your browser only with your consent. You also have the option to opt-out of these cookies. But opting out of some of these cookies may affect your browsing experience.
SAVE & ACCEPT